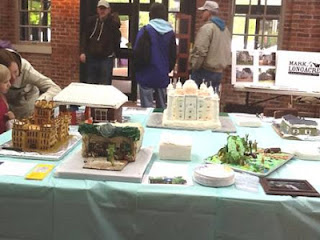 
This is a follow up to my last brief post on Bloomington, Indiana's 2nd Annual Old-House Expo & Architectural Cake Contest which took place Saturday, May 11 2013 from 8:30 a.m. to 2 p.m. in the atrium of Bloomington’s City Hall at 401 N. Morton St. Eight non-professional bakers had cakes in the contest. Cakes ranged from a 19th-century jack plane, a covered bridge to the Taj Mahal! Every participant received an award. Judges for the delectable event were Tommy Kleckner of Indiana Landmarks, Gayle Cook of the Monroe County History Center and Erica Sagon of Edible Indy Magazine.


The photo above shows my Patricia's Wellness Arts Cafe cake, recipient of the “Most Herbal Essence” award and later judged “best tasting”, with Carol Krause’s Downton Abby, recipient of the “Masterpiece” award to the left. Beyond that is Kathy Holland’s “Smitty’s Standard Station” on West Second Street). I loved the use of gummy candy as hose for the gas pump and gummy rings with lifesaver inserts for the wheels. It was one of three cakes to receive an award for “Best Looking along with cakes by Marlene Newman and Hiestand.

To my cake’s right is a historic land area of I-69 cake detailing the architectural significance of irreplaceable land and life formations; the Taj Mahala by first time cake baker Sara Schwab stands brightly white in the background. It is easy to see how this cake won an award for outstanding architecture. 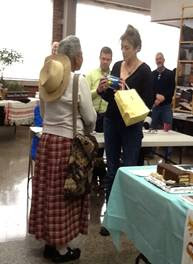 Here I am receiving my award! A blue ball jar with gourmet lollypops.

This was my first ever food contest. I truly had no idea of what I was getting myself into, or the amount of time on my feet late at night to have something presentable. I started out with the intention of building my Quilter’s Comfort “Spicy Ginger Mint” Gingerbread Cake. I think I have been around too many builders because I was trapped in the idea of building a structure. I approached the entire thing from the perspective of parts to be assembled. I baked walls, front, back and sides, roof pieces and doors.

It is clear to me that I also may have been unconsciously influenced by my one experience creating a gingerbread house with my children decades ago. I even created little planter pots from my spicy mint dough to hold thyme sprigs standing in for blueberry bushes which turned out very well. I even tried to make post strong enough to hold up the front overhang. They might have worked had I some very small tube pans.

So there I was with all the pieces baked and cooled, vegan Royal Icing and my cream cheese frosting chilling in the fridge, it was time to put it all together. As I worked, I had been wondering, how was I going to get the thing to stand up? I knew that I had zero ideas for assembling everything in an upright position, and as I dried, it was becoming very clear that inner support (which I did not have) would be the only way the cake would stand. I run out of most of my grains by the time I mixed my third batch, and had resorted to using some brown rice and little barley flour. To say the least there was a variety of strength in the pieces and pieces made with the brown rice and barley began crumbling even as I stood them on edge.

The hour being late, I had been on my feet form nearly five hours, was tired of standing and I decided to lay out the building as you see in this image below and fell into bed.

I woke early the next morning with a plan. Drive to town, get flour, yogurt eggs; start over, this time making Spicy Ginger Mint Pound Cake. After a day in the “Café” I mixed up a new batch of icing and began the process of layering the soft, yet firm cake pieces together with thin coatings of cream cheese frosting. I then cut and layered pound cake to define my store, I was simultaneously deconstructing the first cake, taking large slabs of the crunchy gingerbread cake into my new cake body. Large slabs with Vegan Royal Icing were also layered to the back of my new cake.

As I worked, I thought of the eaters and how they would experience a variety of textures and taste with Quilter's Comfort's Spicy Ginger Mint as the central flavor and the different color layers ranging from caramel to light molasses.

Once I used up all the icing I had, I wished I had more frosting, then the crumbs would have disappeared and left me with a smoother finish and a slightly less rustic appearance. I knew it would taste good.

The little ginger bread pots received a dollop of frosting to secure the thyme representing blueberry bushes. Originally, I thought I would add popcorn to the little branches to represent flowers. I looked through my jars of herbs hoping to find one dried oregano branch to use as the linden tree outside the shop, alas, I did not find one so the sprig of fresh oregano would have to do. I pushed its thick limp stem down into the cake side sidewalk and supported it with amaranth linguini. 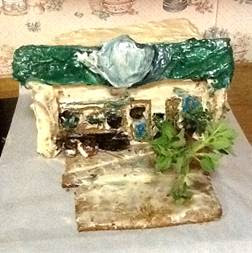 On the drive into town next morning, I asked myself what had I been thinking and that this could be thought of as a once in a lifetime experience. Upon delivering my cake and looking at all the others, I found myself wondering, what building will I bake next year?

Patricia's Wellness Arts Cafe & Quilter's Comfort Teas is located at 725 West Kirkwood Avenue in Bloomington, Indiana. Hours are 1:00pm to 6:00pm and every first Friday 1:00pm to 8:00pm where Patricia and Yuko serve delicious herbal foods and Quilter's Comfort teas. Sometimes there is pound cake on the menu. Visit Patricia's Wellness Arts Cafe on the web at http://www.hartrock.net/cafe.htm.

Posted by Local Food Fairy at 4:41 PM No comments:

This note will be brief, as I intend returning very soon to add the many food notes and images I have been accumulating since my last posting.

The last few days and nights have been extremely intense as I prepared my cake submission for Bloomington's 2nd Annual Architectural Cake Contest. Sitting here, I am happily surprised that my "Patricia's Wellness Arts Cafe" cake received an award for "The Most Herbal Essence" and was judged the best tasting cake!

Posted by Local Food Fairy at 4:09 PM No comments: