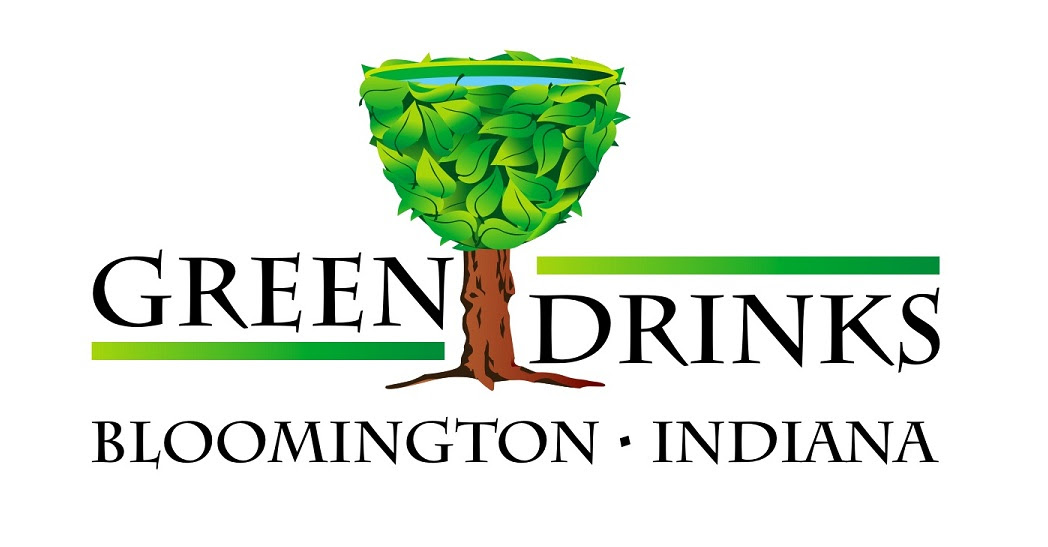 Green Drinks Bloomington premiered the fourth Wednesday in March so I made the mistake of thinking it was a Green Drink event with lots of green drinks, and I was not interested. Then a friend called inviting me to hear someone speak about solar panels in Bloomington - at something called Green Drinks. So I went, saw quite a few familiar faces and learned more about who was doing what with local solar development. After the brief presentation, the mic is open for others to announce something about themselves and their green work.

The second time I went, the program featured Scott Russell Sanders speaking about some key themes in his latest book, A Conservationist Manifesto. I got us the nerve to go up and make an introduction. It was a brief one as I was quite shaken. But, I will return, and it will be easier next time, as I will plan ahead and write may announcement.

This event is open to anyone who is interested in green issues and each is encouraged to bring a friend.

Cost: There's a requested donation of $5. Some finger food will be provided.

Green Drinks Bloomington will be on the fourth Wednesday of every month at locations to be announced.


Contact: To be added to the monthly evite or if you're interested in presenting: greendrinksbloomington@gmail.com
Posted by Local Food Fairy at 5:31 PM No comments:

(I have been known to say a thing or two about seeds, about what is being done to farmers, food, and what it means to us and all life. Yes, I want farmers and gardeners and people who love seed and soil, and who work to sustain healthy food possibilities for all of us to have control of seed, health of the food produced consume, and the water we need to sustain it all. I am in support of all who wish to strengthen our already tenuous seed sources. We are hanging genetically on a few threads, and mutating what is left doesn't sound like a good idea to me. So, again, I say, we must be aware of what is happening with our basic resources.)

Monsanto's Many Attempts to Destroy All Seeds but Their Own

Some say that if farmers don’t want problems from Monsanto, they simply shouldn’t buy Monsanto’s GMO seeds. But it isn’t quite that simple. Monsanto contaminates the fields, trespasses onto the land taking samples, and then sues, saying they own the crop.

Meanwhile, Monsanto is taking many other steps to keep farmers and everyone else from having any access at all to buying, collecting, and saving of normal seeds:
1. They’ve bought up the seed companies across the Midwest.

2. They’ve written Monsanto seed laws and gotten legislators to put them through, that make cleaning, collecting and storing of seeds so onerous in terms of fees and paperwork that having normal seed becomes almost impossible.

3. Monsanto is pushing laws that ensure farmers and citizens can’t block the planting of GMO crops even if they can contaminate other crops.

4. There are Monsanto regulations buried in the FDA rules that make a farmer’s seed cleaning equipment illegal because it’s now considered a “source of seed contamination.”

Monsanto has sued more than 1,500 farmers whose fields had simply been contaminated by GM crops.

There is a reason why I believe Monsanto to be one of the most evil companies on the planet, and this is in large part due to its activities relating to controlling food production through controlling the seeds to produce it.

For nearly all of its history the United States Patent and Trademark Office refused to grant patents on seeds, viewing them as life-forms with too many variables to be patented. But in 1980 the U.S. Supreme Court allowed for seed patents in a five-to-four decision, laying the groundwork for a handful of corporations to begin taking control of the world’s food supply.

Since the 1980s, Monsanto has become the world leader in genetic modification of seeds and has won at least 674 biotechnology patents, more than any other company.

This is not surprising, considering they invest over $2 million a day on research and development!

But Monsanto is not only patenting their own GMO seeds. They have also succeeded in slapping patents on a huge number of crop seeds, patenting life forms for the first time -- again without a vote of the people or Congress. By doing this, Monsanto becomes sole owner of the very seeds necessary to support the world’s food supply … an incredibly powerful position that no for-profit company should ever hold.

How do they defend this blatant attempt to control the food supply? They write on MonsantoToday.com:
“Patent protection allows companies to see a return on their investment which enables further investment in R-and-D and product development. This profit-investment cycle drives product innovation that is responsive to farmer needs.”

Farmers who buy Monsanto’s GM seeds are required to sign an agreement promising not to save the seeds or sell them to other farmers. The result? Farmers must buy new seeds every year, and they must buy them from Monsanto.

Meanwhile, these same farmers who Monsanto is claiming to help are being aggressively targeted and pursued for outrageous patent infringements on these same seeds.

Monsanto employs an arsenal of private investigators and agents who secretly videotape farmers, snatch crop samples from their land and even fly helicopters overhead to spy -- all to catch farmers saving or sharing seeds.

As of 2005 Monsanto had 75 employees and a $10-million budget solely to investigate and prosecute farmers for patent infringement.

And until recently, Monsanto has even been known to sue farmers for GM crops growing on their land that got there via cross-contamination. In other words, a neighboring farm’s GM seeds blew over onto their land, and Monsanto slaps them with a lawsuit.

I realize this seems incredible, but it is true.

Have You Heard of Terminator Seeds?

Creating and promoting GM crops is, in my opinion, a major threat to public health. Patenting those same seeds takes it to an even higher level of evil. But there is another reason why I don’t believe for one second that Monsanto has the virtuous intentions they claim: terminator seeds.

Monsanto is considering using what’s known as terminator technology on a wide-scale basis. These are seeds that have been genetically modified to “self-destruct.” In other words, the seeds (and the forthcoming crops) are sterile, which means farmers must buy them again each year.

This solves their problem of needing “seed police,” but they are obviously looking the other way when it comes to the implications that terminator seeds could have on the world’s food supply: the traits from genetically engineered crops can get passed on to other crops, and often do.

Once the terminator seeds are released into a region, the trait of seed sterility could be passed to other non-genetically-engineered crops, making most or all of the seeds in the region sterile.

Not only would this mean that every farm in the world could come to rely on Monsanto for their seed supply, but if the GM traits spread it could destroy agriculture as we now know it.

How Can You Get Through to Monsanto?

First, I urge you to get informed on the issue by watching The Future of Food. This in-depth investigation into the disturbing truth behind genetically modified foods is one of the best documentaries I have ever viewed. It will help you understand the very real threat that ALL future generations face as a result of genetic engineering.

Next, hit Monsanto where it counts … their bottom line. By boycotting all GM foods and instead supporting organic (and local) farmers who do not use Monsanto’s GM seeds, you are using your wallet to make your opinions known.

This means abstaining from virtually all processed food products (most are loaded with GM ingredients) and sticking to fresh, locally grown, organic foodstuffs instead.

The True Food Shopping Guide is a great tool for helping you determine which brands and products contain GMO ingredients. It lists 20 different food categories that include everything from baby food to chocolate.

I’ve also compiled an excellent list of resources where you can still find pure, GM-free foods, and I encourage you to refer to it often and also share it with your friends and family.

A Fake Group Fights for Monsanto's Right to Deceive You

This Company May Be the Biggest Threat to Your Future Health

Some Farmers Now Protected Against Monsanto Lawsuits
Posted by Local Food Fairy at 4:55 PM No comments:

Hannah had some of here granola available at this years Luna Festival for local tasters to enjoy.

Hannah's Homemade Granola birthed from the scenic north woods of Minnesota and Canada. I began making the granola this past summer, and it soon came to be quite the popular snack among my family and friends. Its chewy texture sets it apart from all other granolas; making it easier to chew and offering more consumption options. My granola can be eaten hot, cold, with milk, alone, hot and with milk (oatmeal anyone?!) or with a favorite yogurt. Its high protein content makes it a breakfast food that really keeps a person full all morning long, and its long shelf life allows them to take it just about anywhere. Made with a peanut butter base with added dried cranberries, honey, wheat bran and rolled oats, it's an absolute kid favorite. But with no added sugar, it's a parent favorite as well. Alternatives are orders with melted bittersweet chocolate and chopped walnuts- a combination to be savored! Hannah's Homemade Granola is a tribute to the treacherous backcountry, the memories I have of it, and hopefully the times to come. For more information you can email me at hanibolecter@hotmail.com.

To keep up with progress of the Incubator Kitchen, visit the Local Growers Guild website at http://www.localgrowers.org
Posted by Local Food Fairy at 4:49 PM No comments: