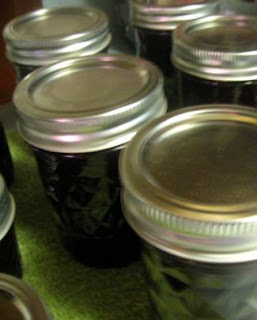 Walking up the gravel drive on a break away from the computer, out of no where, I thought to see how the blueberries were doing. I wanted to eat at least a bowl of them, maybe even ten. It actually was possible I might be able to eat a gallon or six or more. Maybe make a little jam. I thought that might be wishful thinking, with bird netting still waiting to be hung, and birds, well birds, and deer and raccoons and possibly other neighbor creatures always knew when any of the fruits, wild or cultivated were ripe and ready for picking. 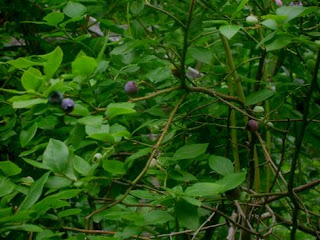 Approaching the oldest of the blueberry bushes, each a good foot taller than I, the birds were on alert calling out in alarm, some daring to fly out toward me as I approached the bushes. It was easy to see why as I approached. There were berries ripe for picking. I turned away from the bushes toward the house where I a donned a hat and long sleeved shirt, choose a quart sized stainless bowl, then returned to the garden. Taking a moment to size up the ripe fruit, I went to one side and began picking. The air was filled with bird talk.

That bowl filled quickly and I returned to the house for a larger one. On the short walk back, blue jays and other winged ones swooped quickly in and out of the plants. As soon as the picking begun, I knew that I would have to pick whatever I could because once I walked away, those birds would be in there snatching for anything ripe for picking. 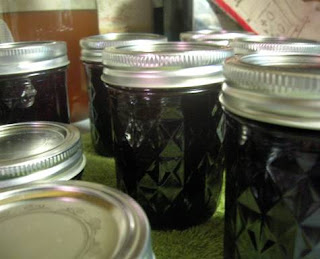 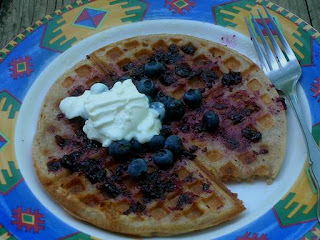 A few hours later, I‘d harvested enough blueberries to make one batch of jam plus a few pints for the pleasure of fresh eating. Since the birds were on to me, that was it for a while. That day onward, still uncovered, they consumed the berries as fast as they ripened. It is what I expected. Last year, well, last year, I recall enjoying maybe a single pint over the weeks of these plants season. The birds were not as generous with my sweet cherries. That is another story or a poem. There are a few berries coming on now, the bird covering is up, and I can take pleasure in eating a handful of two of warm from the branch berries. Smiling in remembrance as I sit down to blueberry rice waffle, , topped with fresh blueberry jam and a light sprinkling of fresh berries and a generous dollop of yoghurt, I am glad for whatever prompted me to check out the plants that day.

© All rights reserved. For permission to reprint, contact Patricia at localfoodbloomington@gmail.com

Patricia C. Coleman (aka Food Fairy) has been exploring organic gardening and fruit cultivation of heirloom varieties since the mid 1970's. Early studies included sustainable agriculture practices of heirloom indigenous agricultural plants and practices that also introduced her to permaculture, edible landscaping and the Findhorn Garden. All work one does with love is a form of play and she enjoys many forms of play and is grateful for every opportunity she has to play in this glorious earth garden.
Posted by Local Food Fairy at 9:55 AM No comments: