The Beauty of Bees And Self-Reliance: A Conversation with Author Susan Brackney

Local Food Bloomington is delighted to introduce our readers to Becky Holtzman. 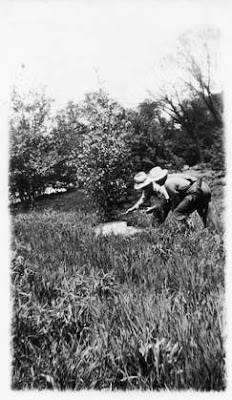 The Beauty of Bees And Self-Reliance:
A Conversation with Author Susan Brackney

At the very start of her funny and fact-packed 2009 book, PlanBee: Everything You’ve Ever Wanted to Know About theHardest-Working Creatures on the Planet, Bloomington author Susan Brackney asserts her interest in self reliance. It was this desire for self-reliance that led to home ownership and fueled a hankering for chickens, which in turn became a path to beekeeping.

For ten years, from the mid-90s to mid-2000s, Brackney moved every single year. As a student earning her Bachelors in English at IU, the annual moves were not so unusual. But after graduating, she still found herself moving from one awful rental to another. Landlords aren’t typically amenable to allowing renters to dig garden plots, so she had abundant—but unsatisfying—container gardens; her spare time was spent reading about homesteading. As Brackney says, she was “pining for land.” Her first homestead was an 850 square foot house on a half-acre inside the city limits.

“My realtor explained that a property like this was only a step above camping, but there were these huge old walnut trees….” (You can hear affection for those trees in her voice.) Family helped build a 144 square foot greenhouse, which was cozy on snowy winter days. Brackney started growing much of her own food, canning, and cultivating loofah gourds.

Brackney really wanted chickens, but a civic battle was raging at the time: chickens were personae non gratae inside the city limits. Honeybees, however, were considered to be “invertebrate livestock.” When a friend gifted her the beekeeping equipment he found at a yard sale, a beekeeper was born.

Brackney has an  of her great-grandfather and grandfather peering into a hive, knee-deep in summer grass. She’s not sure that any beekeeping skills were passed down to her, though. In fact, she ruefully laughs about being beehive-less this winter, following major bee challenges last autumn.

“Have you ever experienced laying workers?” she asks, laughing. “That was a hot mess of a hive.” Laying workers are an unholy disaster, in which the female worker bees decide the queen is no longer up to the job of laying eggs, and start laying their own—unfertilized—eggs. This results in a bunch of (mostly) useless drones, and spells the demise of the hive. Brackney tried the “shake out and forget” trick, dumping the laying workers away from the hive, but to no avail. February 2016 finds Brackney bee-less, but planning for spring.

“My beekeeping mentor was very old school—he had many, many tricks up his sleeve for ‘working the girls,’ as he put it, to maximize honey production. I’m more hands-off.” Brackney says she’s not in it for the honey, and that she’s more likely to put her ear up to one of her hives and give a it a gentle knock, listening for the bees inside, than she is to open it and start poking around.

“Opening a hive is like cracking open a chest for heart surgery. I really don’t want to, unless absolutely necessary.”

Bees boast a social structure that’s both fluid and organized, with most bees having the chance to work at different jobs during different life stages. The youngest bees care for brood, graduate to housekeeping, serve a stint as an undertaker hauling out dead bees, and then move on to foraging in the wider world. Some bees become entrance guards. A honeybee sting means death for the insect, and it’s their last resort when feeling threatened; a honeybee will typically buzz an intruder several times before stinging.

Brackney maintains that discretion is an important skill in beekeeping: while immediate neighbors absolutely should know there’s a beekeeper at work, ideally the bees are managed so efficiently that nobody even knows it’s happening. Checking bees during the week, when neighbors are at work, is a great way to stay on the down low. If one diligently keeps the hive from swarming, and gives away plenty of honey, chances are good that bees will be welcome in the neighborhood.

The pollination of local gardens and orchards is an added benefit of keeping bees. Large commercial orchards—think the acres of almond trees in California, or the orange groves in Florida—truck in mass quantities of beehives seasonally, paying thousands of dollars for pollination services. In fact, this is how many larger-scale beekeepers make their primary income; honey and beeswax are secondary products.

I once heard an older beekeeper, one of the gentlest men I’ve ever met, insist that the way to restore the honeybee is to train thousands more hobby beekeepers, and not have so many giant commercial beekeepers. Who knows if that would do the trick, but many scientists do think that large-scale commercial beekeeping has helped contribute to honeybee decline, by encouraging the spread of disease to already-stressed-by-travel colonies.

The more we can do for ourselves and our communities (human and ecological), the better, and everyone benefits when we invest in our local foodshed Brackney points out that the expensive spinach trucked in from California has lost some of its nutritional value by the time it gets to our plates. Paying a bit more for locally grown food that is in the prime of its nutrient-rich life might save us more in the long run, from the fossil fuels used for transport, tothe value of keeping our dollars in local circulation, to the personal well-being we support when we eat the freshest food possible.

As for the honeybees: you don’t have to keep a hive to support these hard-working pollinators. You can plant blossoms that bees love, in large swaths of your yard. Honeybees practice flower constancy, which means that once a bee finds a flower variety she likes, she’ll work it until there’s nothing left, to the exclusion of other plants. Make it worth her while to visit your yard. Susan created this awesome garden map to give you ideas, and it’s great for welcoming pollinators of all 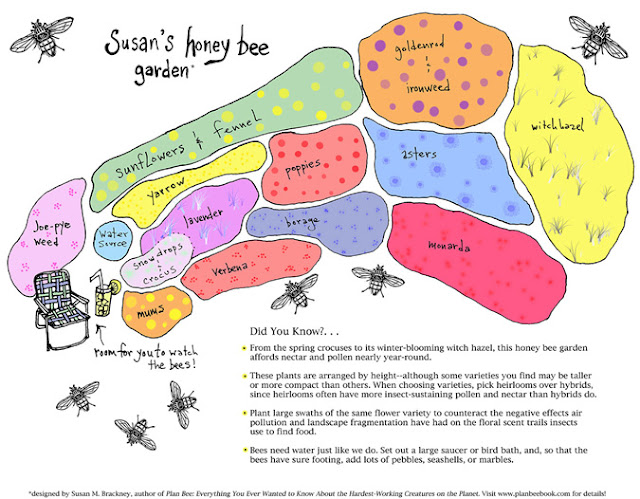 kinds, including native bees and even hummingbirds. You can also provide a water dish – a shallow saucer with small pebbles for bees to perch on will do. And naturally, you’ll want to stay away from herbicides and insecticides that can harm bees.

Beekeeping is a humbling art—the “right” answers are sometimes elusive, and often you just do the best you can, that moment. Brackney confesses she’s not religious, but when she looks inside a beehive, with its order and systems, she feels awe.

Becky Holtzman is a painter and Reiki practitioner in Bloomington, Indiana. A keeper-of-bees from 2011-2015, she hopes to have a beehive or two in the near future. You can find her art at beckytomato.com and her Reiki practice at orangeflowerhealing.com.

*NOTE:  Read More about bees in the Food News

Posted by Local Food Fairy at 11:56 AM No comments:

A lot has happened since the last posting of food events.  It is now easy to see the updating that I have been speaking of for many months.  Many of Local Food pages have been updated (more to come), including  Food News  that has of information about food both in the Bloomington area, but global connections of interest.

2016 is the Year of Pulses which are legumes, beans and peas.  The intro page to Local Food has a list of some remaining heirloom seeds; some names are familiar and many are not.  Following are links to a few of the Food News Articles.  Disturbing article on 90% of the certified organic corn now sold in the US comes from Europe!  A pleasing interview with Executive Chef Padraig Cullen of the Upland in Bloomington, Indiana as well as a luscious pear processing article by Glenda Breeden who has been processing food for her family table most of her life.   There is lots going on in the EU as more than 50% of countries have now banned Monsanto and many others pulling Roundup and other products off their shelves.  We continue to keep a focus on bees, fraking (as water must be protected) and much more.


Posted by Local Food Fairy at 9:10 AM No comments:

I began the year mostly disconnected to technology which has me a few weeks off my to do calendar.  As previously mentioned, Local Food and Food News are being updated at this moment and as much as hands can handle is being done to get it up online.  Local Food is excited about this forthcoming issue.  Yes, I admit to being excited with every update.  And yes, again, I am hopeful that there will be more frequent postings.

Upcoming food events that you may find of interest.


Scholarship Opportunities for Up & Coming 2016
The Indiana Cooperative Develoment Center is fortunate to have received funds from the Howard Bowers Fund and the Ralph K Morris Foundation for scholarships to Up & Coming 2016.  Deadline for applications is 1/20/16 with notification by 1/31/16. Go to the Resources Page for more information.


*The Soil and Nutrition Conference, organized by the Bionutrient Food Association/Real Food Campaign will take place from 8th February to the 9th February 2016 at the Kripalu Center in Stockbridge, United States. The conference will cover areas like nutritionists and food system advocates for a multidisciplinary conversation exploring the potential to improve food quality through regenerative agriculture that builds soil, crop and ecosystem health, xplore how soil health and crop quality are interrelated, and how a renewed focus on the food qualities that industrial agriculture forgot, flavor and nutrition – can help drive transformation with important societal benefits.


*Water for Food Global Conference -  organized by the will take place from 24th April to the 26th April 2016 at the in Lincoln, United States. The conference will cover areas like We are committed to ensuring a water and food secure world without compromising the use of water for other human and environmental needs. Our approach is to extend the University of Nebraska’s expertise through strong partnerships with other universities and public and private sector organizations.

*The Milk and Cultured Dairy Products Conference, organized by the will take place from 24th May to the 25th May 2016 at the Omni Severin Hotel in Indianapolis, USA. The conference will cover areas like IDFA’s Milk and Cultured Dairy Products Conference is a dynamic, information-rich meeting focused exclusively on the information that milk and cultured dairy product professionals need. Learn about the most recent developments in the category and the science behind them. Be inspired by new ideas as you network with industry peers and respected experts. Find out what’s new in ingredients, processing technology and packaging. And experience new flavors, textures and products.
*Re-think Food November - November 4-6, 2016

Posted by Local Food Fairy at 4:46 PM No comments: