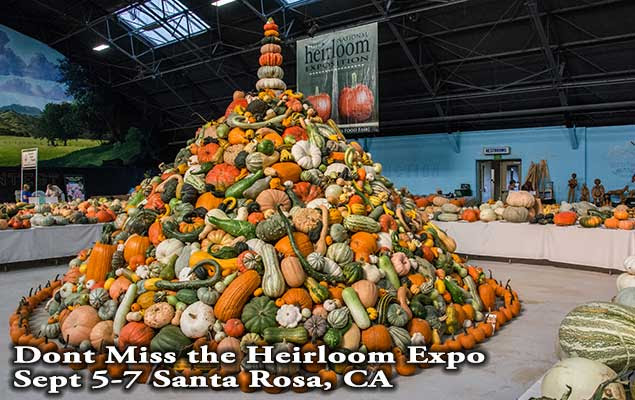 7th annual National Heirloom Exposition on September 5, 6, 7 in Santa Rosa, California.  We are again seeking volunteers to help us spread the word. We need your help especially if you live on the West Coast and would like to distribute brochures to let people know about the expo, please email us at info@theheirloomexpo.com.  Please consider sharing the info with your garden groups, educational organizations, churches, pure food societies, etc.

The National Heirloom Expo features three full days of nationally and internationally acclaimed speakers that include Vandana Shiva, Ronnie Cummins, Jeffrey Smith, Robert Kennedy, Jr., along with many more.  More than 4000 varieties of local produce will by displayed.  Purchase gardening supplies, seeds, sustainable living goods, and so much more from 300 vendors.  The exhibit hall will be home to more than 150 heirloom related exhibits.

Please email us at info@theheirloomexpo.com and let us know how many brochures you can distribute to let more people know about this exciting event.

“Why is seed preservation of great importance to all Eaters?”.

Hope you, or someone you know makes it to

Posted by Local Food Fairy at 4:03 PM No comments:

Will GMO Mustard Be On Your Table?

The beauty of local food for body and appreciation is everywhere in richly colored flowers and ripening fruits!  Each year greater numbers of people, young and old take to growing some of their own food with most throwing in a few flowers.  They may grow in deep raised beds or in pots hight up on a second story balcony.  Not only gardens but chickens.  More and more when walking through neighborhoods you can expect to hear the soft clucking of hens or get glimpses of the small, uniquely designed chicken  houses.  Speaking of birds, Bloomington is now designated as a Bird City!

Summer definitely arrived early in Indiana.  Many June plants are in resplendant glory, while others have already exited the scene, chickory is beginning a season of full on bloom, perrenial Butterfly Weed, Asclepias tuberosa,  joins the color show with its dynamic orange!   The early heat and many heavy storms has been a challenge to plants and local growers.  One good thing thus far is that farmers have already had one early harvest of their hay fields.

So why the title?  Read on.

“Monsanto and Bayer, Dow and Dupont, and Syngenta and ChemChina. They control more than 65 per cent of global pesticide sales. Serious conflicts of interest issues arise, as they also control almost 61 per cent of commercial seed sales.” 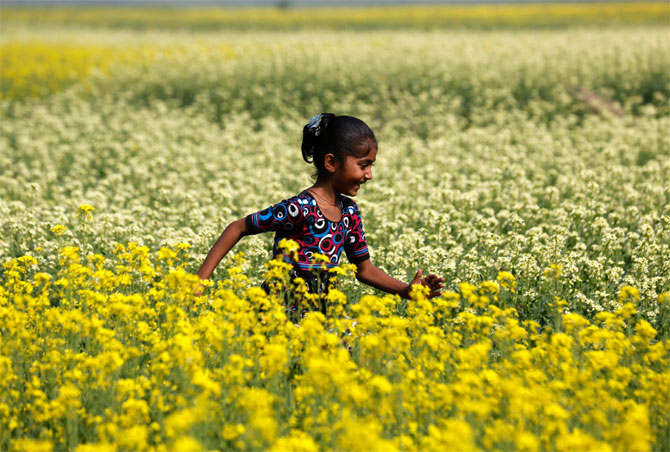 Say no to GM mustard

There are formidable social, economic and environmental reasons why it should not be cultivated

The manner in which the Genetic Engineering Appraisal Committee (GEAC) recently cleared the proposal for genetically modified (GM) mustard is extraordinary to say the least. It makes a mockery of the commitment in the Bharatiya Janata Party manifesto that “GM foods will not be allowed without full scientific evaluation on the long term effects on soil, production and biological impact on consumers”. The Prime Minister had delighted consumers by lending his weight to the promotion of organic food. On the other hand, GM and organic are completely incompatible.
The alluring promises of higher yield and lower pesticide usage which induced many, including myself as Textile Secretary to the Government of India in the 1990s, to welcome Bt cotton have now been belied. Despite increased fertilisers and irrigation, the expectations of enhanced cotton yield have not been realised. Most of the countries that have higher cotton yields than India do not grow GM cotton. The package of promises sold to us did not reveal all of this. If I had an inkling of the future at that time, Bt cotton would not have been introduced in India. Yields as a touchstone

We would now be foolish in accepting the yield promises of the GM variety of mustard, a crop which is an integral part of every Indian’s food. Ab initio the yield claims on which GM mustard has been cleared are not even remotely reliable — being based on comparisons with 30-year-old cultivars, and not on more recent high-yielding hybrids. The highest yields in mustard are from the five countries which do not grow GM mustard — U.K., France, Poland, Germany and Czech Republic — and not from the GM-growing U.S. or Canada (see graph based on FAO data). If India is desirous to increase its mustard yield rapidly and safely, this can be done by adopting the practice of System of Mustard Intensification, for which successful trials have been done in Bihar through a World Bank project. Results showed higher yields and better income. All this without the spraying of any toxic herbicides, which is the undisclosed story of GM mustard.
GM mustard’s yield increase claims have been successfully challenged now, prompting the crop developers and regulators to retract on that front — it is another matter that many reports continue to claim that GM mustard will increase yields.

There have been numerous severe deficiencies in the evaluation process of GM mustard. The risks to health, environment and agriculture have not been evaluated even through those inadequate tests which were conducted at the time of Bt brinjal examination, though mustard is far more extensively grown and consumed than brinjal.
HT (herbicide tolerant) GM crops have been condemned by a number of medical professionals and other scientists for increasing chemical herbicide use, leading to serious health conditions — at all stages, but most worryingly at the foetal stage. A scientific report from Argentina found a fourfold increase in birth defects and a threefold increase in childhood cancers in HT soya areas. Shockingly, the GEAC has conveniently omitted to have any herbicide-related studies. A small committee was constituted to “examine” the safety dossier — the tests that were done and the deliberations of GEAC were shrouded in secrecy. After a scathing order from the Central Information Commission, the GEAC made a sham of public consultations, through an opaque and perfunctory eyewash process.

The U.S. is a prime example of a country which has galloped into the GM mode of agriculture. Studies have shown a strong correlation between growth of GM crops, the herbicides they promote, and diseases such as acute kidney injury, diabetes, autism, Alzheimer’s and cancers in the past 20 years in the U.S. Seventeen of the 20 most developed countries — including Japan, Russia, Israel and most of Europe — refuse to grow GM crops. An unacceptable marketing trick, that of promotion of a “swadeshi” GM, is being used to break down resistance to GM crops in India’s vast market, ignoring that safety concerns are the same — swadeshi GM or not.

The GEAC had itself rejected a similar HT GM mustard proposal by Bayer in 2002. The same reasons apply now. A herbicide-tolerant crop promotes constant exposure to a single herbicide — which eventually results in weeds becoming resistant. Over 20 species of weeds in the U.S. are now resistant to Monsanto’s glyphosate-based herbicide. As desperate farmers tried to control these “superweeds”, there was a tenfold increase in use of glyphosate in 16 years.


T.S.R. Subramanian is a former Union Cabinet Secretary
This article originally appeared in the Hindu.com

For more on GM Read the Food News articles at http://www.greendove.net/foodnews.htm

Thank you!  May we each have an abundance of healthy, regenerative foods and environments!

Food Fairy
Posted by Local Food Fairy at 8:34 AM No comments:


Hello and thank you for coming to this page.  I hope that you will visit Local Food and read some of the news.  We've titled this year as the year of Food Heritage - Opportunities and Choices.  Because you are paying attention, you are aware of the importance of seeds, bees, water and other factors that directly impact the quality of our health and the environment.  Yes, there is something every one can do to say YES to what remains of of our local, national and global food resources.  We have the opportunity to support, develop and enrich regenerative and sustainable food systems.  As eaters, it is our job to expect the healthiest food for everyone, because to be a great community or nation recquires healthy minds and bodies at every stage of life.  Healthy food, air, soil  and water systems are necessary because what is in the water, air and soil is in every bite we consume.

Since 2001 LOCAL FOOD BLOOMINGTON has been offering information
on where we eat; community resources, regenerative gardening and food news
that directly applies to the how, and the why of what we have available on our
tables and how it connects each of us to our national and global food systems.
The Local Food Directory – http://www.greendove.net/localfood.htm features
Baking, Coffee Shops, Breweries, Wineries, Restaurants, Food News, Blog,
Community Food Resources for those in need, Food Education, Food Words,
Food Books, Recipes, Farmers Markets, Gardening Resources, Wildcrafting

You will find articles or connections to these topics and more!

“The nation’s fiscal health is dependent upon the health of the next generation. When we consider the cost of inaction in a matter of national security, lives are at stake.” Debra Eschmeyer, Co-Founder of Food Corps
Posted by Local Food Fairy at 8:50 AM No comments: 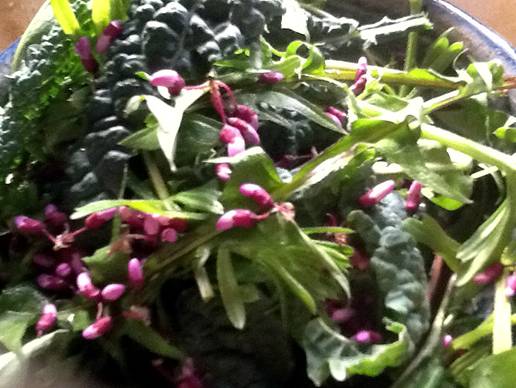 I am finally be getting the Local Food Bloomington website updated! It seems that there are more things to juggle or as I age, am getting a bit slower.   There is tweeking to be done as well as my completion of Food News which I hope will be published by Sunday.  It will continue its look at seed and their importance, establishing seed banks, bees; our connections through the Indiana Holistic Health on open-polinated seed and heirloom plant resources - http://www.indianaholistichealth.net/gardeningresources.htm.  Edible Education, Science and Cooking, and more.

Abundance of Local Food to you!
Local Food Fairy Patricia

Posted by Local Food Fairy at 2:57 PM No comments: