Rose Hips - Fruits of the Rose 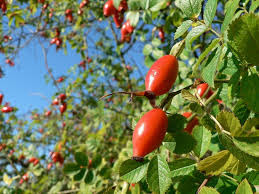 Rose Hips
In late autumn to winter you can find wild rose hips.  Every rose plant makes rose fruits to hold its seeds in round to oblong berries varying in size from the wild dog rose whose fruit are about the size of a pea, to the Rosa rugusa rose that has been cultivated through time into large berries.   I have seen have seen some as big, well almost as big as a golf ball!  Decades past, a wildcrafter of many years told me to always wait until after the first frost to pick my rose hips because the frost somehow transformed them, and according to him, made them better.  He also told me to be sure to never pick hips growing in a spray zone.

Depending on where you live, Rose hips are known by many names.  Some of the more common ones are Apothecary Rose, Dog Rose, Rose Hips, Hip Fruit, Hipberry, Pink Rose, Rosa canina (Dog Rose), Rosa rugosa and Wild Boar Fruit.
Many products are made from rose hips and their seeds, including teas, jellies, jam and tarts, even in soups; and in some instances used as Vitamin C for nutritional supplements.  In former times, according to A Modern Herbal the hips were an esteemed fruit.   Rose hips also contain A, D and E, Carotene, lycopene, iron and antioxidant flavonoids.  The highest vitamin content is found in the fresh hips with preserved berries having reduced levels and cooked ones, even less.

Since heat destroys vitamins in fruits and vegetables, the question asked is; is any vitamin C left in foods containing processed rose hips?  Yes, because Vitamin C from the hips leeches into the simmering water and then the berries are strained.  As reported in the Turkish Journal of Botany, 21, (1997), 323-327, most recipes for Rose Hip syrups and jellies, boil the fruit for 15 to 20 minutes. Thus, it is found that a great deal of the vitamin C remains in the liquid and is available to the body.
Rose Hips have a long association with the human story and you can find many herbal and plant publications containing detailed information.  For instance, you may have learned in History class that Scandinavian and British governments encouraged the gathering and use of Rose Hip as a readily accessible source of Vitamin C during World War II as a substitution for oranges.  When things get scarce people look carefully at, and with greater appreciation, traditional uses of naturally available resources.

Rose hips have been used traditionally in the treatment of stomach disorders and as a general tonic; they has also been used in the treatment of ailments such as constipation, diarrhea, gallbladder problems, some urinary tract and kidney disorders; for sciatica, gout, pains in the legs and back.  Some modern physicians also use it to support the health of persons with high blood pressure, high cholesterol, weight problems, diabetes, colds and related fever and in the treatment of some types of Arthritis and connective tissue problems.

If you are interested in more information visit your library, they probably have a great selection of herbals and of course you can do a web search and have possibly millions of pages to examine.

All that said I hope you will enjoy some Quilter’s Comfort Certified Organic Rose Hip Jelly.  It is made in small batches just like all my other products, and some tasters say that it has a taste reminiscent of cherries! You will have to decide on the taste for your self!   I will also have coffee jam and Elderberry Rose Mint jelly.

For more information about Quilter's Comfort products available at the 2015 MAKEVENTION CLICK HERE.

Until next time,
Abundance of great food!

Posted by Local Food Fairy at 12:05 PM No comments: